‘Ninnila Ninnila’, ‘Theeni’ review: Ashok Selvan, Ritu Varma and Nithya Menen film is a story of love and healing, with food as the catalyst 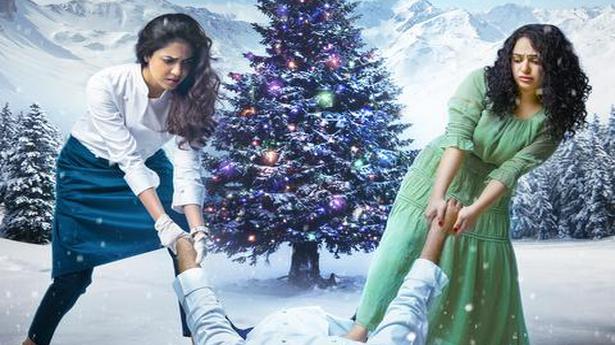 There are two approaches to cooking — one that follows recipes to the minute detail by measuring at every step, and one where ingredients are combined with an intuition and practised sense of smell and taste rather than by the measuring spoon. Whatever be the method, good food nourishes the soul. Ani I V Sasi’s Ninnila Ninnila (simultaneously dubbed in Tamil as Theeni) shows a bit of both methods and roots for the second one. Food, here, reminds the central characters of people they have loved and lost. Food also helps to revive or forge new connections, heal, and find a new purpose in their lives.

Ani Sasi juxtaposes two unlike people who will soon cross paths. An insomniac and pot-bellied Dev (Ashok Selvan) whose life has been thrown out of gear after a loss, and Tara (Ritu Varma) who hopes to fill a void by mending a broken bond. He is a mess, suffers sporadic muscle spasms and cooks by instinct, dishing out lip smacking delicacies. She is a stickler to discipline and has an obsessive compulsive disorder.

The story could have been set anywhere and it wouldn’t make a big difference. But London gives the film’s team an opportunity to plate international dishes in a restaurant run by a Michelin star chef (Nasser), and for cinematographer Divakar Mani to romance both London and food through his lenses. The head chef has a Gordon Ramsay-like reputation. Add to that, no one has seen him cook or eat in the restaurant. A personal incident has rendered him sour.

In the cold, grey winter of London, these three characters gradually thaw, with food as a catalyst. With a handful of characters and barely a few locations, Ani Sasi doesn’t digress much from the core plot. Satya livens up the happenings in the kitchen with humour. Rajesh Murugesan’s music fits in aptly both in the kitchen and elsewhere.

The coldness with which Tara treats Dev melts, literally, after both of them get trapped briefly in the kitchen’s cold storage. Dev’s past is characterised by childhood friendship and the shared love for food. These portions, unfolding against the Old City of Hyderabad, celebrate chai and short eats. The bond between Dev and Maya (Nithya Menen) somehow comes across as slightly obsessive than just cute.

There isn’t much happening in terms of the story and what unfolds in the restaurant on one night seems too long, despite the film’s length being shorter than two hours. Ritu as the tough girl who is actually yearning within, Ashok as someone who hasn’t come to terms with loss and Nithya as the impish and childlike friend keep us engaged. On a side note, watching Ashok Selvan in the flashback portions, it’s hard to shake off the uncanny resemblance with R Madhavan in his younger days.

(Both Ninnila Ninnila and Theeni can be viewed on ZeePlex)

Santanu Hazarika and his world of cyborg queens and laser kings

Williams has not played since she lost in the Australian Open semifinals in February to Naomi Osaka. Serena Williams has signed a deal with...
Read more

From screening reruns of old movies to converting their properties, how single-screen theatres survived the pandemic

As single screen theatres in the South struggle to survive the pandemic, they rely on old favourites — from Kamal Haasan’s ‘Kalaignan’ to...
Read more
Entertainment

Navina Najat Haidar, Kathleen James-Chakraborty and Abeer Gupta to discuss the intersection of art and rock formations of Hyderabad and Deccan

The genius of ‘Cook with Comali’

A fan pictures together the experience of ‘discovering’ the much-loved cooking show that reinstated joy and happiness during a period of uncertainty, ahead...

The original 2005 Tamil version, starring Vikram as a frustrated everyman developing multiple personality disorder to take on the system, was a massive...

Monga was given the honour of Knight of the Order of Arts and Letters at the Residence of France for her contribution to...

A unique gallery display shows a photographer’s journey through 2020’s lockdown months in the form of screenshots from video calls Of the many things...

Santanu Hazarika and his world of cyborg queens and laser kings

The ‘Dreamum Wakeupum’ girls: Priyanka and Sindhuja on their viral Instagram Reel

Sky is the limit after India’s success in Argentina: Manpreet Singh

Logitech Voice M380 Wireless Mouse has been launched in China. The mouse makes its debut after Logitech and Baidu Brain announced a long-term...
Read more

Realme 8 5G's India launch has been officially teased on Flipkart, but without a release date being mentioned. The Flipkart page does not...

PlayStation 5 is receiving its first major update that brings new storage options and some social features. There are some personalisation options as...

Nokia 2.2 is receiving the Android 11 update. The smartphone was launched in India in June 2019 with Android 9 Pie and was...