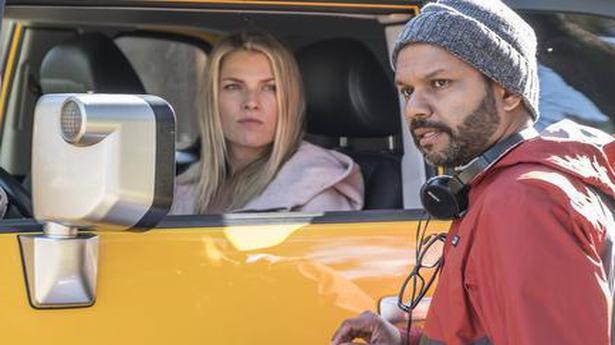 It is no secret that Ron Perlman looks scary, whether in his bright red Hellboy suit or his leather chops for Sons Of Anarchy or in a sheriff’s uniform for the upcoming The Last Victim. But director Naveen Chathapuram assures that Perlman was the one on set cracking jokes with his trademark wry humour. “He would tell the crew who’d ask him to hit a certain marker on set, ‘Don’t tell me where to stand’ or he would say ‘I’ve been accused of worse’ when a violent scene would come up, and he would have the most straight face and it took a while to understand that humour; then we realised he was pulling our leg! This was a great tension-easer,” laughs Chathapuram over a video call with MetroPlus.

The Last Victim is a neo-Western thriller set in the American southwest, following Sheriff Hickey (Perlman) trying to solve the worst case he has seen in his small town, likely caused by a violent local gang led by a fearsome criminal.

Coimbatore-born Chathapuram has always been fascinated by neo-Western thrillers, as he watched these films growing up. He learned that the success of this genre is the filmmaker’s smart treatment of a good script and mindful casting, while retaining the core.

The filmmaker had his own grit around this project; it was actually conceptualised more than 15 years ago. He was first introduced to the storyline by anthropologist Dr Neal ‘Doc’ Justin, and he later shared the screenplay with writer Ashley James Louis and soon, a first draft of a sript was ready. But the location for which they had planned burned down from a forest fire. So the team had to shelve the project. Chathapuram, however, did not give up. “It was to be my second film as a producer too, so we all naturally put everything into it. But looking back, I know I had to trust in the process and I knew it would all eventually pay off. I tell myself daily, ‘Today I may worry about what might happen tomorrow, but I have no control over tomorrow’. ”

For Chathapuram, one of the biggest characters of The Last Victim is the setting (in southwest USA). “I grew up in Chicago and when I was about 22, I went to Arizona for the first time. There were such stunning landscapes but it was a culture shock for me,” he recalls, “Doc and I explored some border-towns that had populations of 30 people and some communities where the nearest neighbour was 15 miles away, and there would be just a couple and maybe their dog on this 100-acre property. I got to see how dialogues extended in such settings of isolation, and I always wanted to explore this. Early on, in my career, I filmed a few projects in New Mexico, which also had communities in their own bubbles. So for The Last Victim, I loved exploring this as a thriller.”

So on a production design level, this made working on The Last Victim – which was shot in Canada – quite fun. “The deserts were pretty much done for us. We also found a diner at a gas station that had shut down 30 years before, and we rebuilt and ‘renovated’ the same diner in a warehouse,” he describes, “We also needed a trailer park and we had a tough time finding the right type of trailer. We found an old 1960s bus on someone’s property and he had a rodeo ground for a long time where this bus had rotted. So we moved the bus and turned it into a trailer.”

Bringing on Ali Larter, Ralph Ineson, Penikett and Perlman as well as a spread of young talent such as Dakota Daulby and Tom Stevens was exciting for Chathapuram because they truly believed in the vision of The Last Victim. “Ron, from the get-go, plays a sheriff who is against his ‘type’, but at the same time, he can embody the sheriff in his sleep. There were so many relatively new cast and crew on this project but he made everyone so comfortable. Camille Legg who plays a deputy said she was nervous to act with Ron but Ron assured her by being just another actor,” he explains.

Director Naveen A Chathapuram with actors Ron Perlman, Dakota Daulby and Camille Marie Legg on the set of ‘The Last Victim’

He adds, “I saw Ralph Ineson in the horror film The Witch, Harry Potter and The Deathly Hallows, and Game Of Thrones; he is just a chameleon. Though he is known for thrillers, he broke out in the UK’s The Office, so he knew how to pull of scenes which had dry humour and irony. Ali had probably the most challenging scenes because there are a lot of outdoor gear-heavy wilderness shoots and in Canada the dip into winter is more like a plunge. But she brought physicality and grit, while turning her suffering into a space of characterisation. And the crew came together to be her support structure.” Ultimately, Chathapuram says everyone became “a family” while shooting The Last Victim.

Not many know this but Thor and Extraction actor Chris Hemsworth has credited Chathapuram for his Hollywood break, starring in 2010 action-thriller Ca$h. Any plans of another collaboration? “Last I saw him was on the sets of Avengers,” laughs Chathapuram fondly, “and we stay in touch occasionally. But we are two people who are drawn to good stories and if we happen to work on something together again, that would be the ultimate reason. I have never seen anyone so hard-working; yes, he works out a lot but he is extremely humble and I remember when he used to live in his manager’s guest house even when he was getting roles — that is how level-headed he has always been, aspiring for good storytelling. And he has succeeded in that, and I am truly happy for him.”

Stay in the know

Chathapuram, having been both producer and director in an industry where longevity is a success, says knowing the in’s and out’s of the business of filmmaking is extremely important, especially for younger filmmakers. “Early on, I saw there were a lot of young and talented filmmakers who lacked production or financing expertise,” he explains, “Though it wasn’t my inclination, I learned the nuts and bolts of production and how to finance a picture. There’s no set formula but with the skillsets you acquire, you learn how to process what is needed monetarily, in terms of tax credit, pre-sales, distribution, or even the other side of it like making it attractive for big names to get attached. Connections are helpful, especially in getting a film financed. Up-and-coming guys should get into production as it will help them in the long run.”

The release of The Last Victim is yet to be finalised but Chathapuram is open to OTTs, theatrical release or day-and-date (OTT and theatre combined), as long as people connect with the story.