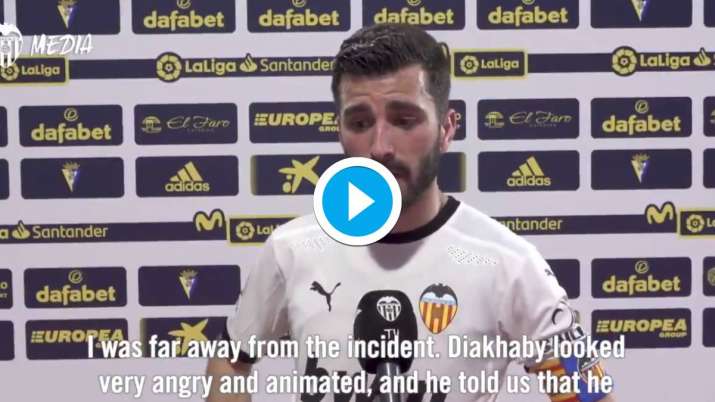 Valencia stopped playing its Spanish league game at Cádiz on Sunday and walked off the field after one of its players said he was racially insulted by an opponent. The club said it resumed the game after feeling threatened by the referee with the loss of points.

Valencia left the field after Mouctar Diakhaby said he was insulted by Cádiz defender Juan Cala, who denied any wrongdoing. Cádiz, from southern Spain, condemned racism but said it “cannot comment on incidents that arise between players during the course of play.”

“The referee told the players about the potential consequences of not returning to the field,” the club said in a statement. “The players were forced to play after the threat of punishment.”

In a video released by the club, Valencia skipper revealed the ‘unacceptable’ incident.

Valencia had said earlier that the decision to return was made after a request to do so by Diakhaby, who is Black.

“The team have held a meeting and decided to continue the game, in order to fight for the honor of the club, but denounce racism of any kind,” it said in its Twitter account in English. “The player, who had received a racial insult, requested that his teammates return to the pitch.”

Cádiz said it is “against all forms of racism or xenophobia” by anybody and that it works “hard to help eradicate” them.

“Anyone guilty of such an offence, whether or not they belong to our team, must be punished,” it said in a statement.

The club reiterated that it has “complete confidence in the integrity of our squad members, who are staunch supporters of the fight against racism and have at all times shown an exemplary attitude in every match the team has played.”

Valencia said it offered its “complete backing” to Diakhaby.

“WE SUPPORT YOU MOUCTAR,” it wrote.

The captain said they hadn’t talked with Cala, but that by the way Diakhaby was reacting, he was “sure” that something was said to him.

Cádiz coach Álvaro Cervera said Cala told him he didn’t insult anybody and that he believed his player.

“He told me that he never insulted the other player,” Cervera said. “We need to condemn these actions when they occur, but I believe what my player told me.”

Cádiz defender Marcos Mauro avoided talking about the incident but said Cala is a “good teammate” and is always very “respectful” of others.

The Spanish league has not so far commented on the incident.

Sanctions could be imposed if Valencia makes an official complaint to the Spanish soccer federation after the referee’s game report is released.

The club said it hoped the incident would be fully investigated.

The match was nearing the 30th minute — with the score 1-1 at the time — when Diakhaby and Cala clashed while going for the ball. An exchange of words appeared to upset French defender Diakhaby, and the two players shortly after got into an altercation near midfield, with their teammates having to break them apart.

Diakhaby was immediately shown a yellow card for the altercation with Cala, who had tried to avoid it at first.

After speaking with the referee, Diakhaby and his teammates left the field and went into the locker rooms. The Valencia players returned several minutes later to resume the game, with the team saying it was abiding by Diakhaby’s request.

“We were told that if we didn’t come back we could lose the three points and maybe more,” Gayà said, without elaborating on who told them to resume playing. “Diakhaby said we should return and that’s why we did it. We wouldn’t have returned without his permission.”

Diakhaby did not continue playing, though, with Hugo Guillamón coming on.

Cala continued playing but was substituted at halftime. He had scored the team’s opening goal in the 14th minute.

Cádiz won the match 2-1 thanks to an 88th-minute header by Mauro, moving further away from the relegation zone.

Kevin Gameiro had equalized for 12th-place Valencia in the 19th minute.

“Today is a sad day for our sport,” Valencia said. “We didn’t lose only a match, we lost the respect and the spirit of soccer and of sport.”