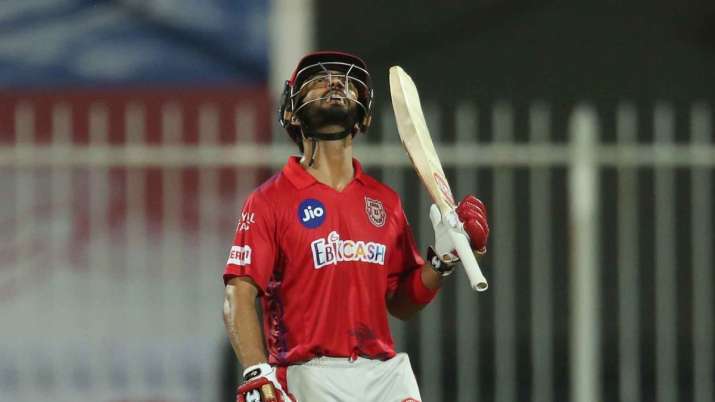 Kings XI Punjab opener Mandeep Singh on Monday powered his team to a comfortable 8-wicket win over Kolkata Knight Riders in Sharjah. Mandeep slammed unbeaten 66 runs off 56 balls and dedicate his innings to his late father, who passed away a few days ago.

Chasing a target of 150, Mandeep struggled a bit during the initial phase of his innings, but after skipper KL Rahul‘s departure, he took the responsibility and finished the game for his team. The 28-year-old magnificent knock was laced by eight fours and two sixes.

An emotional Mandeep said that his late father used to tell him to remain not out in the game.

“This was very special. My father always used to tell me you should remain not out in the game. This one is for him. Even if I scored a double hundred or a hundred, he used to ask me, ‘Why did you go out?’,” Mandeep said after the win against KKR.

The stylish batsman also shared his equation with his opening partner Rahul.

“My role was to score quicker, but I wasn’t comfortable doing it. So I told Rahul if I play my natural game, I can see this through. So he was okay with me taking my time and he went after the bowling,” he said.

Mandeep shared a 100-run stand alongside Chris Gayle, who slammed 51 runs off 29 balls. The 28-year-old said that the Universe Boss should never retire.

“I just told Chris he should never retire. He is the World Boss. He is too good,” he concluded.