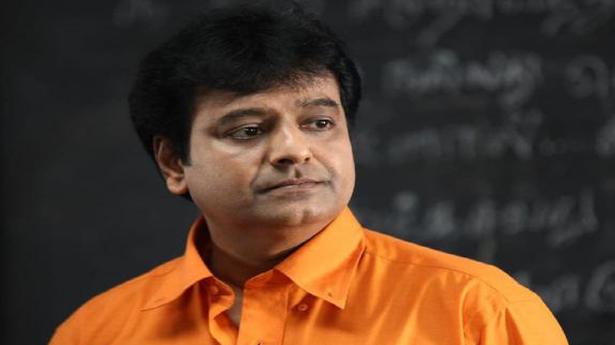 Despite popular predecessors in comedy, Vivekh still managed to create a unique identity for himself in Tamil cinema

Comedy and Tamil cinema are inseparable.

If Nagesh used his amazing body language and humour to make people laugh in the ‘60s, the pair of Senthil-Goundamani dominated the comedy space subsequently. Their search for the missing banana in Karagattakaran is referenced even today in many Tamil households. The pair had a very Tom and Jerry vibe to them, with Goundamani often pulling Senthil’s leg to elicit laughter.

When Vivekh entered his golden phase in the early 2000s — a period when he did more than 25 films a year with leading heroes — the biggest change was how, unlike most of his predecessors, he incorporated current real situations and relatable elements in his comedy.

“A comedian needs more than just a sense of humour. He needs to observe everything around him,” he once told this reporter.

This observational skill and knowledge of current affairs in the State made him stand out from his peers. If the other leading comedian then — Vadivelu — used facial expressions and voice modulation to great effect, Vivekh’s strength was in the dialogue itself and the resonance it had with audiences.

Take Vikram’s superhit 2004 flick Saamy, for instance. Vivek played a purohit in the film, but still managed to take a dig at the then-changing rules on vehicle number plates, the search for brigand Veerappan and went on to gently poke at differences of opinion between followers of Siva and Vishnu.

“His biggest plus was satire and comedy with a message,” popular stand-up comedian Praveen Kumar told The Hindu, “After Kalaivanar (NS Krishnan) left, that space was empty for a long time; Vivekh filled that void perfectly. He was different from the comedians then, because he incorporated a relevant social message in his humour.”

Praveen’s favourites include the comedian’s outings in Pennin Manadhai Thottu and Dhool. “He proved that even a message can be conveyed in a humourous manner. His lines with respect to superstitious beliefs are simple, funny and relatable.” Vivekh’s upbringing and education might have steered him in that direction; his lines were mostly urban and rational, unlike his comedic counterparts.

In the 2000s, a film might have a big/upcoming star, but it still had to have a parallel Vivekh comedy track to go with it. Some films starred him as an essential character in the script — usually the hero’s best friend — which he played many times alongside all the leading actors.

In fact, directors started demanding a Vivekh comedy track in their films; Lingusamy’s hit Madhavan-starrer Run was an example of how an entire comedy track was inserted after the film was made. “I didn’t know how to insert a track and kept asking the director how I could write a comic character when the hero (Madhavan) does not even meet him! It suddenly stuck me that that very thread could be the knot — a friend coming in search of Madhavan,” recalled Vivekh in an earlier interview. Run went on to win several awards for the same.

The separate comedy track concept might have eased its way out of Tamil cinema in recent times, but Vivekh had also moved on, and was trying his hand at serious films (Vellai Pookal) and other interesting subjects (he played Dr Kannadasan in 2020 flick Dharala Prabhu). He kept inspiring artistes; the current and future generation of comedians will always look up to his brand of humour as one to emulate.

Vadivelu on Vivekh: ‘Every word that he uttered was impactful’

Vivekh and music: The comedian who played the piano

Actor Vivek, a green warrior who targeted to plant one crore saplings

Thank you, Vivekh: The man who made us laugh and also question

Actor Vivekh continues to be critical; on ECMO

A Malayalam short film that pans in on an aspect of...